The 7th of eight surviving children, Rt. Revd. Enoch Atuboyedia was born on Friday 10th March 1972 at Okrika in Okrika Local Government Area of Rivers State. He was well brought up by his parents Pa Enoch Atuboyedia of Amafina House, Ambemebiri and Late Mrs. Silverline Abomake Atuboyedia of Kirikeneabere-Bilogbolo, Gream Ama, who imparted in him the agelong family values of humility, integrity and self-reliance.

Rt. Revd. Enoch Atuboyedia was baptised by the Revd. S.P.O Mamah in 1973 and became a Helper at age ten in the Children’s Church of St. Peter’s Church, Okrika in 1982. He gave his life to Christ in 1987 when he was only fifteen years and started Teaching in Adult Sunday School at the age of 20. He was confirmed by Late Bishop Samuel O. Elenwo at St. Mary’s Church, Kalio Ama in 1994.

Enoch Atuboyedia attended the Boys State School, Okrika from 1978 to 1984 and the famous Okrika Grammar School (OGS), Okrika and obtained the Senior Secondary School Certificate (SSCE) in 1991. He established a successful Laundry and Dry-cleaning enterprise at Okrika from 1991 to 1994, but his pre- destined inclination for God’s Ministry took him to Trinity (Union) Theological College, Umuahia in 1994 where he graduated with a Diploma in Theology in 1997. In his quest for further education Rt. Revd. Enoch Atuboyedia, holds the Bachelor of Education Degree (B.Ed.) in Religious Studies of Ignatius Ajuru University of Education, Rumuelimini, Port Harcourt Rivers State and a Master of Divinity Degree from the Crowther Graduate Theological Seminary, Abeokuta, Ogun State.

Enoch Atuboyedia was ordained Deacon at St. Peter’s Church, Okrika on 20th July, 1997 by the Rt. Revd. Gabriel H. Pepple, Bishop, Diocese of Niger Delta, his first as a Bishop. He was priested at Bethel Anglican Church, Amadi Ama on 29th November 1998 and installed Canon of St Peter’s Cathedral, Okrika on 26th September 2010. He was preferred and collated Archdeacon at the same Cathedral by the Rt Revd Tubokosemie Robinson Abere (JP)) on 28th December, 2012.
In the various churches he served as Curate, Vicar and Archdeacon Enoch Atuboyedia left indelible marks and inspired hope in the congregations.

Similarly, he was First Chaplain of the Council of Knights, Diocese of Okrika from 2004 – 2014, Assistant Coordinator, Anglican Communion Brigade from 2002 to 2004 of Old Province 2 (currently comprising 5 Provinces and 54 Dioceses) and Chaplain/Coordinator of the Prayer Ministry, Diocese of Okrika, where he successfully organized the annual Diocesan Prayer Conference from 2014 to 2020. He served the Rivers State Government as a Member, Judicial Commission of Inquiry on Integrated Medical Industry, 2018/2019.
Enoch Atuboyedia was elected Bishop during the Episcopal Synod of the Church of Nigeria, Anglican Communion in Abuja on 22nd July, 2020. He was consecrated at the Cathedral Church of the Advent, Life Camp, Gwarimpa, Abuja by the Archbishop, Metropolitan and Primate of All Nigeria, Anglican Communion, The Most Revd Henry Chukwudum. Ndukuba on Monday 21st September 2020 and was enthroned as the second Bishop of the Diocese of Okrika on Monday 28th September, 2020.

In the life of Rt. Revd. Enoch Atuboyedia the number “3” is significant. He is the 3rd priest from his patrimonial linage. The first two were the late Venerable Harold E. Oriaku and Revd. (Lt.) T.N. Oriaku. In his matrimonial family, he is the number 3 ordained pastor. The others are the late Revd. Wokoma Solomon Harrison and the Venerable Biebele Obuoforibo. Enoch Atuboyedia is also the 3rd Anglican Bishop of Okrika extraction. The first two are the Rt. Revd. Tubokosemie Robinson Abere (JP) and the late Bishop Anga Fred Nyanabo. Similarly, Of the four Bishops consecrated by Archbishop Henry Ndukuba on 21st September, 2020 Enoch Atuboyedia was number 3. The first two were Bishops Peter Oludipe and Adegoke Agara and the 4th, Gabriel Elabor. Biblically, the Number 3 is the number of God – God the Father, God the Son and God the Holy Spirit.

His ambition is to build on the foundation laid by his predecessor, the Rt. Revd Tubokosemie Abere for continued growth and development of the Diocese spiritually and economically. His priority is “to make sure that the Church in Okrika land becomes a strong voice in the land so that she could influence the community positively”. Rt. Revd. Enoch Atuboyedia is happily married to Mrs Aikiogha E Atuboyedia and they are blessed with children. May God the trinity guide and lead his new assignment.

Born on Friday 18 August, 1950, his parents the late Pa Robinson Iyoyo Abere and the late Madam Elverah Afieboka-Dikibo-Abere raised him through childhood in the best family traditions and values of Okrika people. Okrika was once a city-state and commercial hub in the Niger Delta, Rivers State, Nigeria.

A graduate of the University of Port Harcourt, Rt. Revd. Abere’s epic missionary journey, started early in his life He was among the first to join the Scripture Union in 1970 and gave his life to Christ in 1971. He was Chapel Prefect at OGS in 1973, Organizing Secretary of the Christian Union at the University of Port Harcourt, 1980/81, and was made a Lay Reader as a student, at the same University by Rt. Revd. Samuel Onyeukwu Elenwo of blessed memory in 1981. He was President of the Scripture Union Pilgrims Group, Port Harcourt Township from 1985 -1989. In addition to activism for Christ, His Lordship was also active in Students Unionism. He was President, National Union of Rivers State Students (NURSS), University of Port Harcourt (1980/81) and Acting National President of the body in 1981. He stood up for the welfare of students in Nigeria. Bishop Abere played valuable roles as Scout Master and was part of Nigeria’s delegation to World Scout Jamboree in Japan from July to August 1971. In a show of family intimacy, he bought a Japan’s Air Lines post card during the journey, and sent this note to his father, Pa Robinson Abere, 46/48 Freetown Street, Port Harcourt on 29th July 1971: “Dad, we are on our way to Japan. We left on the 28th July. We arrived at Nairobi to pick up African Scouts and a night stop. How is the family? My mum and others. I am sure you’re your well. Through God’s grace, I shall come back to you in peace….” These divinely cut out roles, prepared him for what he was to become later in life. He had a brilliant career in the Rivers State Civil Service and rose to the position of Deputy Director of Education.

In obedience to his natural inclination for missionary work Rt. Revd. Tubokosemie Abere attended the Trinity College, Umuahia and obtained a Certificate in Theology in 1991. He was ordained Deacon in 1991 and Priest in 1992 by Bishop Samuel Elenwo. He was Installed Canon of St Stephen’s Cathedral Bonny in 1999 and Collated Archdeacon by Bishop Gabriel Pepple in 2002. 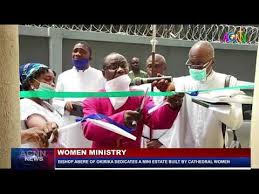 Bishop Abere made profound contributions to the growth and development of the mother Diocese of Niger Delta through various positions of trust at Archdeaconry and Diocesan levels. He was Secretary of Okrika and Bonny Archdeaconry Boards at different times., and Bishop’s Chaplain to. Rt Revd. Pepple from 1999 – 2000

The Diocese of Okrika was created at the meeting of the Standing Committee of the Church of Nigeria held at All Saints Cathedral, Cable Point, Asaba, Delta State on 11 March, 2003 to comprise the churches in the Archdeaconries of Okrika, Okrika West, Okrika North and Okrika South with St. Peter’s Anglican Church, Okrika as Cathedral. St. Peters Church was built in 1924. It became a Cathedral seventy-nine years later, in 2003.

The Diocese was inaugurated on Monday, 17 November, 2003 by His Grace, Most Rev. Peter Jasper Akinola then Archbishop, Metropolitan and Primate of all Nigeria, Anglican Communion. Rt. Rev. Tubokosemie Abere (JP) was enthroned the same day by His Grace, Most Rev. Emmanuel Nglass, then Archbishop, Ecclesiastical Province of the Niger Delta. At the ceremony, the Deed of Relinquishment was read by the Chancellor, Diocese of Niger Delta Sir (Chief) Godwin A. Graham-Douglas (SAN) under the supervision of the then Bishop, Rt. Revd. Gabriel H. Pepple. The service was attended by the then Governor of Rivers State, His Excellency, Sir (Dr.) Peter Odili. The Bishop of the Diocese of Kano Rt.Revd. Zakka. I. Nyam preached the sermon and the text was chosen from Ecclesiastes 3:1-8.